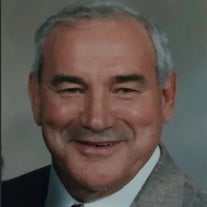 Mural Wayne Beckett, 88, was called to Christ Wednesday, April 20th surrounded by family. His story was filled with faith, family and friends. If you asked 100 people to describe Mural, 100 people would include the words kind, generous, strong and faithful. His race was filled with the sincere serving of others and showing his gratitude each day for God's many gifts. He first served as a Deacon and then became an Elder at Duenweg Christian Church where he was a lifetime member. Mural was born June 26th,1933 to Jack and Nadine (Endicott) Beckett. He spent his childhood years in the Scotland Community, graduating from Duenweg High School in 1951. He spoke fondly of his HS friends and the fun times they shared. Soon after graduation he began his 39 year career with Atlas Powder Company. That job was put on hold when Mural and his lifelong friend, Jack Barham, joined the United States Navy. Days before leaving to serve in the Korean War, Mural married Monta Lou King on May 17th 1953, beginning their 70 year love story; 66 on earth; the last four in his heart and memories. Mural and Monta Lou settled in Joplin raising four children and staying in close contact with extended family. Mural is survived by his son Biff Beckett (Beth), son Logan Beckett (Kelly), daughter Whitney Weakley (Dan), and daughter Piper Hollars (Jim). Survivors include 10 grandchildren; Deke Beckett (Trisha), Josh Beckett (Rachel), Patrick Beckett (Johanna), Jason Beckett (Rachel), Katelyn Beckett, Paige Kropuenske (Tyler), Blake Weakley, Quinn Weakley, Lee Hollars (Amanda) and Alyssa Cranston (Justin), his half-sister Beverly Beckett Ash, 14 great grandchildren and several nieces and nephews. He is preceded in death by his parents, wife, sister Ruby Faye Kingery (Richard), and beloved Aunts and Uncles who have all enriched his journey with joy, love and strength. A memorial and celebration of life will be held Tuesday, May 17th, 2022 at The Duenweg Christion Church. The service will begin at 2:00 p.m. followed by a dinner at the church. Duenweg Christian Church - 5803 East 20th Street, Joplin, MO 64801

Mural Wayne Beckett, 88, was called to Christ Wednesday, April 20th surrounded by family. His story was filled with faith, family and friends. If you asked 100 people to describe Mural, 100 people would include the words kind, generous, strong... View Obituary & Service Information

The family of Mural W. Beckett created this Life Tributes page to make it easy to share your memories.

Send flowers to the Beckett family.