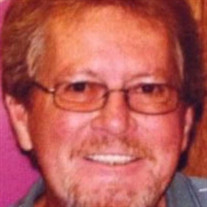 Marvin "Mark" Henson, 66, Webb City, MO, passed away peacefully on Monday, April 11, 2022, at Freeman Hospital in Joplin MO. Mark was born September 23, 1955, in Joplin, to Claude Henson and Charlott (Marney) Henson. Mark graduated high school in Webb City, MO. He worked most of his life as a salesman with local companies such as, Gooch Brakes, Ozark Kenworth and Premier Truck Group. In April of 1986 he married Glenna Donaldson Henson, she survives. He is survived by his parents, Frank and Charlott Smith, daughter, Bobbie Smith and husband Mike, sons, Matthew Henson and Adam Henson, sisters, Colleen Wilson and husband Keith, and Tammy Landsaw. He has many grandchildren whom he loved spending time with, they brought him so much joy. He loved being “papa” to all his grandchildren. Mark is preceded in death by his father, Claude Henson, brother, Lee Henson, son, Daniel Henson and niece, Chasitity Wilson. Mark was an avid fisherman. He loved spending time outdoors tinkering with his boat, shooting guns and taking care of his yard. He could always find a project that needed to be done. Mark was a talker. He could carry on a conversation like no other. All who knew him will miss his talks and advice. He was loved by many and will be missed greatly.

The family of Marvin Henson created this Life Tributes page to make it easy to share your memories.

Send flowers to the Henson family.