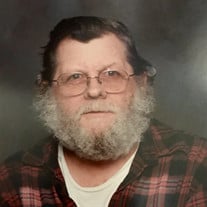 Larry Harvel, 72 years of Joplin, MO passed away Thursday, 5/19/22 He was born in Houston, TX on 8/3/1949 to Audrey (Mitchell Harvel Coons) and William (aka: WR or Shorty) Harvel. They both preceded him in death. Larry was married to Pat... View Obituary & Service Information

The family of Larry D. Harvel created this Life Tributes page to make it easy to share your memories.

Send flowers to the Harvel family.