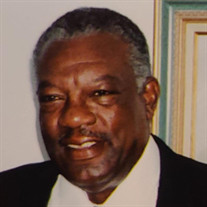 Junior L. Young born June 4, 1941, in Lacygne, Kansas went home to be with the Lord, December 11, 2020. We honor the life he lived as he was dearly loved by many. Junior was a unique man. He had a large presence that would exude a quiet yet strong confidence. Junior was a man above men. After Junior graduated from High School he began working at the Faulk Corporation in Milwaukee, Wisconsin. Junior was a hard worker. He later became a supervisor and worked faithfully until he retired forty years later. Upon retiring Junior and Elouise moved back to Fort Scott, Kansas. In his retirement years Junior led a simple but fulfilled life. He loved his family, his wife (Elouise) of 54 years, His daughters Shirley (Cookie) and Terri (who lovingly referred to him; as “Turk”), his sons Willie and David who challenged him quite often in dominoes. His grandchildren adored him. The family recognized him as the head of the family. He made an impact on everyone who knew him. Junior loved playing, strategizing and eventually winning in dominoes. He also loved the Green Bay Packers. He rarely missed a game. He was an avid hunter and loved fishing. Junior was competitive. If you challenged him in anything, you had to bring your “A” game, or you would pay for it. Junior’s was greatly loved by his family: He was preceded in death by his mother Geneva Sullivan Bates his father Marion Young, his youngest son David, and two Brothers Goldie and Ricky. He leaves behind his wife (Elouise), two daughters Shirley (Cookie), Terri and one son Willie (Beth). His grandchildren, Larry (Caronda), Willie, Tami’ca, Brandin, Quincy, Eleana and Dalisa. His greatgrandchildren: Deriyel, Lazzarus, Larriontae, Omunique, La’Zerious, Zavion, Za’Laya, Quincy Jr, Cameron, Mikyla, Princess, Israel, Braylie, Nikkita, Taylan, Isabella and one great-great grandchild (Nia’Loni). Five brothers, Wayman (Linda), Floyd, Wade (Mary), Rodney and Michael (Alice). Two sisters, Teresa (Frank), Sudie (Ike), and a host of nieces, nephew’s cousins and friends. As you can see his life was full, and we celebrate his life here and his homegoing to Heaven. He is in the best place. In the presence of the Lord there is fullness of Joy. Time would fail to tell all about his life. We will miss Junior L. Young. However, he continues to live in our hearts and memories.

Junior L. Young born June 4, 1941, in Lacygne, Kansas went home to be with the Lord, December 11, 2020. We honor the life he lived as he was dearly loved by many. Junior was a unique man. He had a large presence that would exude a quiet... View Obituary & Service Information

The family of Junior L. Young created this Life Tributes page to make it easy to share your memories.

Send flowers to the Young family.