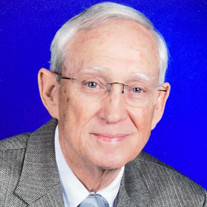 Bonham Wayne Oney, 78, of Carthage, Missouri, passed away on May 29, 2022, at St. Luke’s Nursing Center. He was born on August 15, 1943, in Louisiana, Missouri, to Dr. Glenn Reid Oney and Bonnie Sue (Freeman) Oney. He graduated from Alba High School in 1961, and graduated with a Bachelor's Degree from Kansas State College of Pittsburg (PSU) in 1968 and received his Master’s Degree in 1972. Bonham taught and coached at North Platte High School in Dearborn, Missouri, and Lamar High School in Lamar, Missouri. In 1971, he started a career selling insurance for Missouri Farm Bureau before retiring in 2009. He loved his job, and always said there was never a day he didn’t want to go to work. He especially enjoyed playing golf during several trips he earned because of his sales to such locations as Monaco, Hawaii, and Aruba. He prided himself in taking care of his clients and all the friendships he made during his career. Bonham was a longtime member of the First Christian Church in Carthage, Missouri. He loved to serve communion to shut-ins, sing in the church choir, and was a member of many quartets. He looked forward to ringing the bell for the Salvation Army each Christmas season and singing carols to the shoppers and children. He was a longtime season ticket holder and supporter of Stone’s Throw Dinner Theater in Carthage, Missouri. Bonham loved playing basketball, baseball, refereeing and umpiring. He was a lifelong fan of the St. Louis Cardinals. He was introduced to golf by his brother Ron. After 55 years of swinging clubs, he finally achieved the elusive hole in one on September 16, 2015. He co-hosted the annual golf tournament for the Four State Christian Fellowship. While he enjoyed the game of golf, he most enjoyed all the friendships he made on the course. On May 8, 1965, he was united in marriage to Lida Ruth Scott, and together they have shared the last 57 years. They were blessed with two sons, Scott Reid Oney and Glenn Ray Oney; and one granddaughter, Julia Anne Oney; all of Carthage. He is also survived by sister-in-law, Ellen Oney of Webb City; nephew, Ronald Freeman Oney II of Joplin; and a niece, Sherry Byrd Brown, of Carl Junction. Bonham was preceded in death by his parents and his brother Ronald Freeman Oney. Services will be held on Saturday, June 11, 2022, at First Christian Church, 800 South Main Street, Carthage, Missouri. Visitation will be at 10:00, followed by a service at 11:00. Burial will be at a later date. In lieu of flowers, the family requests donations to the First Christian Church (the Bridge), or the Carthage Crisis Center.

The family of Bonham W. Oney created this Life Tributes page to make it easy to share your memories.

Bonham Wayne Oney, 78, of Carthage, Missouri, passed away on...

Send flowers to the Oney family.