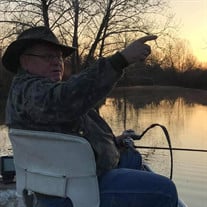 Barry E. Collier passed away from this earth on August 22nd 2021. He had just turned seventy-four on August 9th. He served 2 years in the navy and fought in Vietnam. Barry was a truck driver for 44 years until he was diagnosed with two stage four cancers and beat it despite medicine and doctors giving him three-six months to live. We were blessed with twelve more years with him. Barry was an amazing husband, dad, brother, uncle, grandpa, great-grandpa, and friend. Barry did not know a stranger. He would give anyone the shirt off of his back. He was a warrior, strong, caring, loving, compassionate, and an honest man who loved God, his family, and his friends. If you could not find Barry chances are he was out on the water fishing, riding his motorcycle or at the casino. He will be missed by everyone who meet him. Barry is survived by several family members. His wife Penny Collier. His sister Suzanne Vance. His sister-in-law Jean Collier, and Debbie Denny His children include Alisen Collier-Taulman (Derek), Mike Moyer (Lyndicy), Misty Fulk (Don), Seth Collier (Tiffany), and Corey Mckinney. His grandchildren include Raeshele Badgwell (Cody), Naomi Curtis (Anthony), Cody McLean (Caitlin), Levi Collier (Jordan), Alex Collins (Elizabeth), Shelsie Moyer (Cameron), Trenton Moyer (Chiara), Samantha Burlingame, Corey, Dalton, and Hunter Mckinney, Karmen Nicaise, Kassidy Richey, and Lacey Collier. His great-grandchildren include Myra Fulk, Jesse and Noah Collier, Keyara and Kyrie Curtis, Blakely, Paisley, Cash, Clayton, and Daysie McLean. His best friend Dave McLean. Long time neighbor and friends Frank and Kandice Heflin. His extended family April Moyer, Angie Collier and several nieces, nephews, and close friends. Barry was preceded in death by his Parents Isabell and Charles Collier, his brother Charles Collier, sister Georgia Collier, sister-in-law Lisa Donaldson, son Jesse Collier, and granddaughter Mayleigh Mckinney. The family will be having a celebration of life at a later date.

Barry E. Collier passed away from this earth on August 22nd 2021. He had just turned seventy-four on August 9th. He served 2 years in the navy and fought in Vietnam. Barry was a truck driver for 44 years until he was diagnosed with two stage... View Obituary & Service Information

The family of Barry E. Collier created this Life Tributes page to make it easy to share your memories.

Send flowers to the Collier family.